Get fresh music recommendations delivered to your inbox every Friday.
We've updated our Terms of Use. You can review the changes here.

by The Fool Bros. 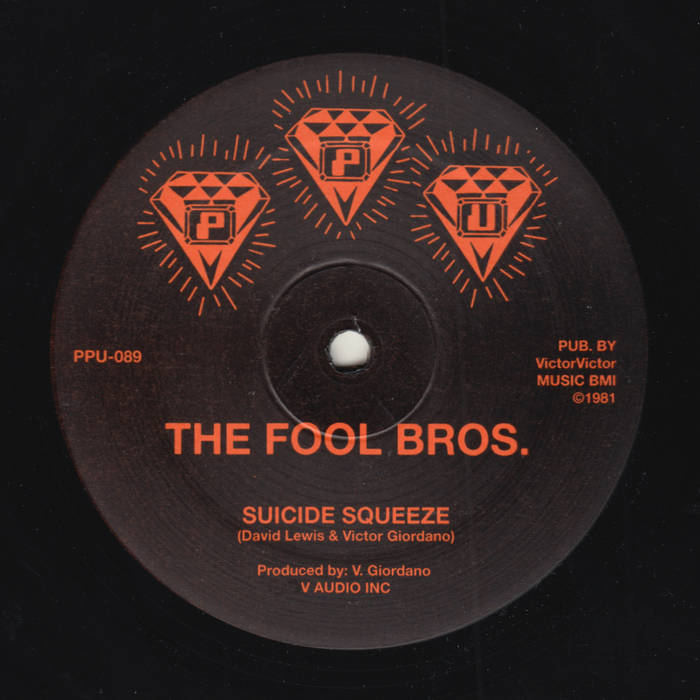 Single sided with both the original 1983 private release and Victor Giordano's updated 2018 recording! Recorded at V AUDIO INC., "Suicide Squeeze" is the second baseball related record to be released on PPU!

I started writing and recording music in High School using 2 Sony two track tape recorders to simulate multi-track recordings. Around 1969 I met David Lewis. We played in three bands, Cold Teeth, The Enerjets and The Fool Bros. Members included Sam Kirckhoff, Geoff Royce, Richard Armiger, Ralph Tucker and Guy (Yug) Phillips. In ’74 a friend brought me out to Blue Seas, a recording studio / record pressing plant in Hunt Valley MD. Basically I started living there. George Massenburg created the first fully parametric eq / programmable console and state of the art compressor. This brought in the big names. Little Feat was making “Feats Don’t Fail Me Now”. Lowell George was producing Robert Palmer “Sneakin’ Sally Through The Alley”. Emmy Lou Harris was recording with The Seldom Scene. People like Bonnie Raitt and Van Dyke Parks were regular visitors. The studio was being managed by Steve Boone (Bass -The Lovin’ Spoonful). He was putting together a band and I was asked to play guitar. With Trudy Morgal, Lee Diamond and Bobby Webber, Blanche performed regionally till ’77. In ’76 Blue Seas moved to a refurbished grain barge in Baltimore’s Inner Harbor, then under construction. On Christmas Day 1977 the barge sank in freezing water. Most of the equipment and tapes including a Steinway Grand were lost.

Assuming I was a recording engineer, Flite Three Studios in Baltimore asked if I would like to be their chief music engineer! I had to learn quickly but took the gig. At Flite Three I recorded local bands, gospel groups, my bands The Enerjets, Fool Bros. (Suicide Squeeze, The Birds Are On Tonight) and in 1980, began a long relationship with John Palumbo and Crack The Sky. White Music was the first of many projects.

In 1985 I moved over to Sheffield Studios in Phoenix MD, one of the first studios on the east coast with a SSL console. There I continued working with Crack The Sky and worked on a variety of projects including a Choice Hotels commercial with Johnny Cash. In 1986 at John Palumbo’s suggestion I created an alias (Rik Harley) a heavy metal band “Steel Rider” and an album “Eat The Monster”. I used a Teac 8-track, a Linn drum and a Rock Man in a spare bedroom. It was never released but in 2005 I was writing for a production company in LA. My wife suggested I send it to them. They licensed 8 songs and two were featured in MTV’s “Road Rules”.

In 1990 I became the first official employee of Clean Cuts Music with Jack Heyrman and Tom Alonso. While there I worked on hundreds of commercials and several album projects including “Dr. John Plays Mac Rebennack” and Wall Matthews “Riding Horses”.

Over my career I've co-produced and played on two Greg Kihn CDs “Mutiny” and “Horror Show” and also had the opportunity to work with Barry White, Bill Withers, John Sebastian, Werner Herzog and Sam Shepard.

In 2003 I started V Audio and went freelance. In ’04 –‘05 I was a staff composer for Bunim- Murray Productions in Los Angeles, writing for NBC, FOX and MTV. Since then I am a freelance mixer / sound designer at The Discovery Channel. I have two Telly Awards for music and sound design. I produce all Baltimore Orioles and Washington Nationals radio promos for MASN Sports.

Record releases in 2018 include Entourage “Ceremony Of Dreams” with Wall Matthews, Fool Bros. “Suicide Squeeze” 1981 – 2018 and in October Little Magic “Good Thing You’re A Kid”. A collection of songs from original plays by Nancy Lewis music by Victor Giordano.

Bandcamp Daily  your guide to the world of Bandcamp